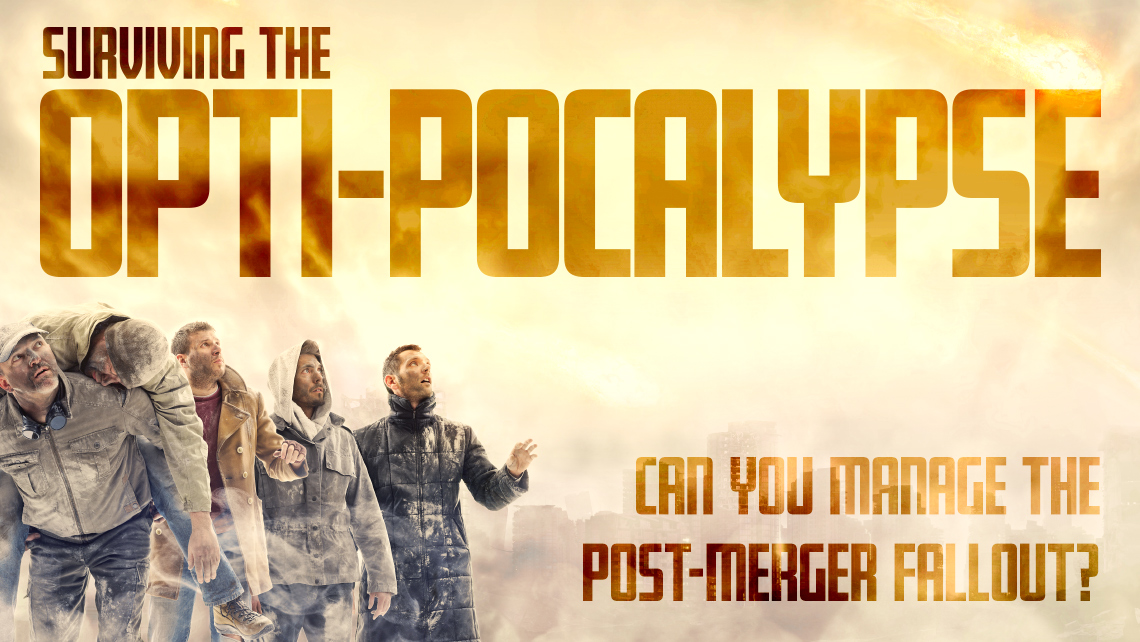 War. War Never Changes. Seemingly stuck in an unending battle. People that were once friends have changed sides, and are now working for the ‘other side’. Brother against brother, with the larger side having an inescapable grasp around the throat of the opposition.

You’re the opposition, by the way. At least, we hope you are.

With all of the mergers going on, there’s a lot of uncertainty in the industry. There’s been a lot of talk about what the future is going to be like, and if there’s going to be a place for independent eye care professionals in it. Now, we’re not just having competition from online, but from the very companies that profess to ‘support your business’.

The problem that a lot of independents face now is that they feel like they are stuck supporting a cause (or Big Optical, in this case), and they can’t break free. Whether it’s frames, lenses, or something else, many people feel like they aren’t really able to change. Part of this, of course, is due to massive marketing efforts over the years. Of course they want you to think that you’re powerless to change – they don’t want you to. They want you to think their products are the only ones you can sell, because if you started to question that fact, then you might start being dangerous. And that’s not allowed.

When you can’t even tell who your opposition is, that makes it really, really hard to win. Whether we’re talking about cyborgs or companies, if they have a pleasant face, it’s easy to forget about the cold machine that lies at the heart of it. In our industry, you’ve probably read plenty of stories about smaller companies being acquired by larger ones. I’m sure, however, that you don’t always see (or remember) every acquisition. That makes it really hard to remember who belongs to who.

Let’s take a look at all of the buzz that happened when the Essilor/Luxottica merger was announced. I saw all kinds of people looking for ‘other options’, whether it was for frame lines, lenses, or whatever else. Their rationale being, usually, that they would rather support other companies besides those two. The disturbing thing that I noticed, however, was that many of the ‘alternative’ companies that were being suggested were also owned by one of those two mega-companies.

When someone was asking for other options for lenses, for example, one of the constant suggestions was “use Shamir”. Even though it’s been six or seven years since Essilor bought half of Shamir. Of course, they don’t go out of their way to announce that fact. They want you to think of them as separate companies, and there’s nothing wrong with that. When you want to know who benefits from your purchasing dollars, however, it’s an important fact that you need to have in order to make your decisions.

Just like a military operation, your business thrives on your supply lines. If you can’t get the product you need, then you are stuck. You can make all the sales in the world, but if you can’t deliver in the end, then those patients are not only going to walk, they aren’t going to come back. This means you need multiple options – since I’m sure you’ve heard the concept of “not putting all your eggs in one basket”. This applies to your vendors, especially. Having multiple sources for all of your products only makes sense.

I’m sure the last thing that you want to do after a sale is call the patient back and say that “Sorry, your lenses are on backorder for three weeks”, or “The color in that frame you picked out won’t be in stock for a month”. The point here is that you need to make sure you have more ways of getting a product than just from one vendor, since you have no control over what they do. What if they decide to change the terms of your business arrangement? Then what do you do?

The War of the Words

Communication is perhaps the most potent weapon that we have in today’s world. Being able to spread a message to large amounts of people is what makes it easy for larger companies to control the narrative of the industry. They are large enough to dump massive amounts of cash into their advertising campaigns – whether it’s email, sales reps, television, radio, or whatever else. If you keep seeing their messages everywhere, it works its way into your brain. It becomes more familiar to you, even if you’ve never even used their product. This makes you more susceptible to their messages, since you’re more at ease with it. When you compare this to something from a smaller independent, the independent can be at a large disadvantage.

Fraternizing with the Enemy

Maybe you think a lot of this is over-reacting. Maybe you’ve done well so far. Maybe you’ve sold a bunch of the Big Optical frames and lenses, and done quite well with it. Don’t get me wrong – I’m not saying nobody’s ever been successful with it. The message here is that times are changing, and you need to look at the unpredictability of the future, not the successes of the past. If you pause for a moment – if you look at five years ago, how many people came in and either googled or searched Amazon for the frames on your board? Now, how many did that last week? Or how many patients decided to buy online?

As we see, the model for eyewear sales is changing – are you sure you’re going to be on the winning side in another few years? You need to seriously evaluate what the future trends in the industry are going to be, and what use Big Optical is going to have for you once they develop their own retail channels, because your customers can get the same brands that you sell cheaper online, or at the big box store down the road.

As we’ve all see over the past few months, there’s a lot of change going on in the industry, and we aren’t traditionally very good at accepting it. The model that we’ve had hasn’t really changed much for hundreds of years – eyewear was eyewear. With the rapid expansion of technology in all aspects of the optical world, however, the recent years have seen an unprecedented shift in the core dynamics of eye care and eyeglasses. We are shifting from more of a goods-based model to that of a service industry.

The experience that you give to your patients is why they are going to come back. No longer do you just refract them and they leave. Or just “fill their prescription” for eyewear. You need to enhance the entire patient experience – as that’s not something they are going to get from an online or big box shop. We’re at the verge of the end of one way of life, and the beginning of an entirely new way of looking at eyecare.

It’s the end of the optical world, and I feel fine.