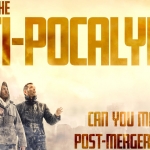 War. War Never Changes. Seemingly stuck in an unending battle. People that were once friends have changed sides, and are now working for the ‘other side’. Brother against brother, with the larger side having an inescapable grasp around the throat of the opposition. You’re the opposition, by the way. At least, we hope you are. With all of the mergers going on, there’s a … END_OF_DOCUMENT_TOKEN_TO_BE_REPLACED