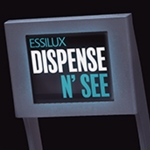 John opened his eyes. The world slowly brightened, but remained blurry. He was very groggy and hazy, and couldn’t really remember what he had been doing or where he was. He tried to reach over to his nightstand to grab his glasses, but instead his hand slapped against something cold and metallic. “What the…” he began to say, but was interrupted with a loud hiss of air escaping … END_OF_DOCUMENT_TOKEN_TO_BE_REPLACED