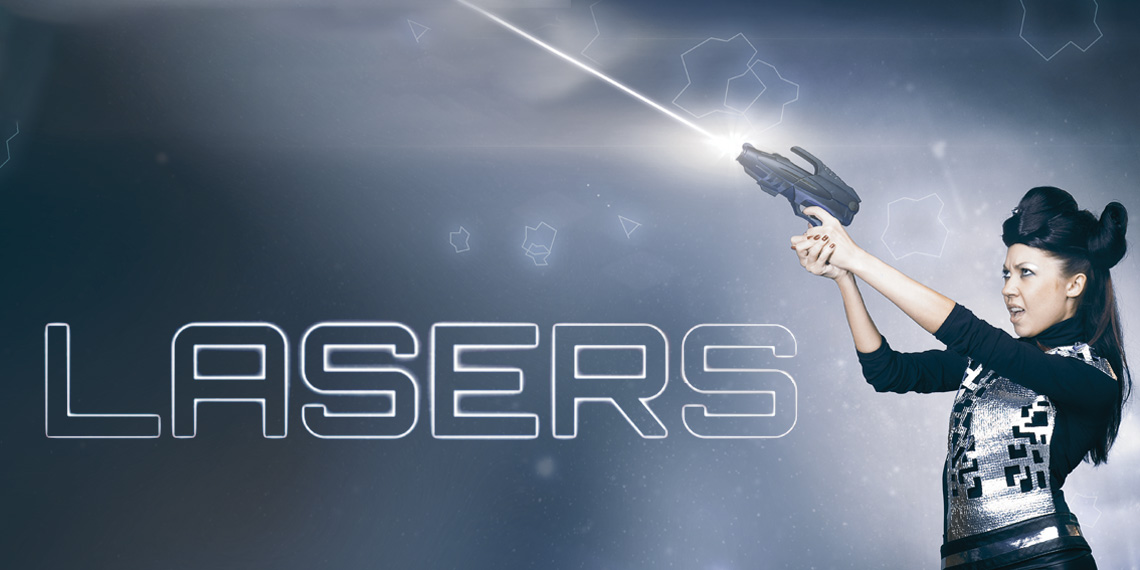 There aren’t a whole lot of things cooler than lasers. Granted, they’d be even cooler if we could somehow figure out how to attach them to the head of a shark, but that specific configuration doesn’t really have any practical applications in the field of eyewear. Not yet, at least. We will keep you posted if we find one. Lasers themselves, however, do play a part in today’s lens technology, and can often be one of the more prevalent issues that you face when using free-form lenses.

When going to mark up a lens, the thing that you want most in the world is to be able to easily find the progressive engravings so you can orient the lens correctly. You want this to be quick, painless, and easy. That seems like a perfectly reasonable request, but the problem is that outside of that minute or two that you are orienting the lens, you never want to see those engravings again. From that point on, you never want to see them, and you certainly don’t want the patient to notice them. It’s this strange balance of wanting to be seen and also invisible that makes it such a difficult thing to balance.

So, when lens markings have a problem, they end up in one of two categories. Either they are “too light”, or “too dark”. We are, of course, aiming for “just right”, but sometimes defining exactly what counts as “just right” can vary from person to person. Just like how everyone will have slightly different preferences on what temperature they like their porridge, each person will have a preference for how dark is “too dark” and how light is “too light”. When we come to an optical lab needing to engrave progressive reference marks onto a lens, this can be something that they need to overcome in order to get things just right. Some of them have the capability to tailor to your specific tastes for the depth of these marks, and this can be something that’s worth discussing with them. You should, however, be aware of all of the factors that can affect what a marking looks like, as it’s nowhere near as simple a recipe as “add hot water and stir”.

The first thing that we need to look at is what machinery is involved in the engraving process. Generally, there are two different ‘types’ of laser that are in use for marking optical lenses. Carbon Dioxide (CO₂) lasers, and Ultraviolet (UV) lasers. Of these two, the most prevalent are the CO₂ lasers, due to their lower cost. Most major optical equipment manufacturers offer a CO₂ laser option, as it’s a necessary part of the process in making free-form lenses. The CO₂ laser can often be distinguished by the marks it makes appearing as a series of dots, as opposed to straight lines. UV lasers, on the other hand, use a shorter wavelength of energy that is more easily absorbed by most lens materials, which means it has much less heat buildup and is able to create images with straight lines and curves. These lasers are not as common in the optical industry, as they tend to be more costly than the CO₂ lasers, and require more care to use.

The reason we end up with ‘dots’ on CO₂ laser markings is because the laser makes a series of small movements and pulses instead of a continuous line. One of the reasons for this is that the CO₂ lasers produce a large amount of energy as heat, relative to the amount of energy that’s used to actually make a mark in the surface of the lens material. The ‘dots’ help to space it out, and prevent the material from melting too much. The ‘dots’ can be also thought of as little craters, where they have micro-ridges that go across that top, as the laser basically bores a hole into the lens, forcing the material to move up or melt. What this means is that if you make a mark that is too dark or deep, you can end up with a correspondingly tall peak. While this won’t be visible to the eye, it can lead to problems later on down the line, such as causing coating issues on the lens. These peaks can very easily cause coating to pool or streak, leading to an uneven surface. Since UV lasers do not generate anywhere near the heat of a CO₂ laser, they do not tend to have issues with creating rough edges that can cause these types of coating issues.

One of the constant problems with engravings is consistency on both sides of the lens on higher prescriptions. When we deal with lasers, they all have a very specific distance at which their power is optimal, and the further that you get from this ‘sweet spot’, the less power you end up with, as the beam is out of focus. With a CO₂ laser, this spot is relatively narrow, so that if you have a lens with a large thickness disparity between nasal and temporal (like a high minus), then you may end up with the temporal side much closer to the laser source than the nasal side. This usually results in the nasal side engraving being normal, while the temporal side ends up invisible. The benefit of a UV laser is that the ‘working area’ is much larger than that of a CO₂ laser, which means that labs that utilize this kind of a laser can reduce problems with this type of engraving issue.

Perhaps the most difficult part about engraving a lens, however, isn’t simply making the mark and checking it. The problem to consider is what is going to happen to the lens between when it is engraved, and when it’s actually inserted into a frame. It still has a number of steps to go through, all of which could affect the visibility of the marks we just made. For example, hard coating is going to fill in the engravings, so we need to make sure that the marks are still visible after putting the hard coat on the lens. This also goes for antireflective coating, tinting, or whatever other processes the lens might go through. The marks that are put on the lens are not very deep to begin with, and now we are doing things that are going to fill those tiny marks back in. We need to make sure that they are still visible, of course, but not TOO visible.

Lens material is going to play a part in all of these steps. As I’m sure anyone that ever edged a lens knows, not all materials behave the same way. This goes doubly so for trying to mark the lenses. What would be ‘too much’ power for one material can be ‘not enough’ for another material. Some materials are more sensitive to the heat of a CO₂ laser, like 1.74 high index. This material tends to melt more easily, resulting in the marks looking pretty much the same, regardless of how much power you use. Other materials, like Trivex, will blacken if you put too much heat into it.

Even after all this, ‘too dark’ and ‘too light’ are subjective. Some people like them lighter. Some like them darker. I’ve had someone once ask to make a lens with no marks at all, because the patient was extremely picky and demanded it. In order to account for this, a good lab should be able to adopt ‘settings’ for your account. Such as adjusting your ‘default setting’ to be 10% darker or lighter, depending on your personal preferences.

The main take-away here is that hard coating and Rx variability play a large part in how free-form lens markings look. It only takes a few microns of coating to go from ‘too dark’ to ‘too light’.

Special thanks to AZOT, LLC in their help with this article.
To learn more about their laser systems, visit www.azotllc.com